Californians who value equal rights, justice and tolerance suffered a crushing defeat with the passage of Prop. 8 last month.  Like many people, once it became clear that an early lead the polls was being erased by devastating and deceptive advertising, I gave a significant amount to the No on 8 campaign through Equality California in order to make sure we got our message out.  So it was particularly galling to hear how ineffective and badly managed the No on 8 campaign was. 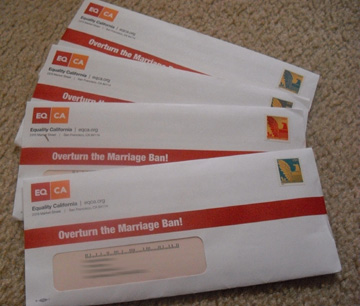 Like Loading...
This entry was posted in Not so great things going on and tagged Prop 8. Bookmark the permalink.

2 responses to “Ongoing fallout from Prop 8”