Posted on November 4, 2009 by rpnorton | Comments Off on Save our secretaries! City layoffs endanger school workers

If the principal is the head of a school, the secretary is the heart of the school office. Secretaries welcome visitors, answer phones, translate for parents, hand out band-aids and ice packs, comfort sick children waiting for their parents to pick them up, sort mail, handle essential paperwork for the principal and other school staff, and generally keep the school running from day to day. At my daughter’s elementary school, “Ms. Grace” greets children and parents with a warm smile and a “Hello darling!”; when the playground felt too chaotic she would let my oldest “visit” and bang on her typewriter.

But some of our school secretaries are in danger of being bumped out of their jobs by more senior City workers who have been laid off by their departments as part of the City budget crisis. For almost a century, certain public jobs in San Francisco have been governed by the Civil Service System, a system of complex rules and job classifications intended to make the hiring, seniority and layoffs of government positions work in an orderly way.  There are arguments in favor of the Civil Service rules, including the fact that having these objective rules allowed women and people of color to advance into positions offering them secure futures and a living wage.

However, even though the school district is a state agency, we are considered to be a city department by the City’s Human Resources department, and some (but by no means all) of our jobs are considered interchangeable with other City positions (the history and reasons behind this are too complex to go into here, even if I were able to fully explain them). When layoffs happen, either in the school district or in the City, laid off workers may use their seniority to “bump” less senior employees from their positions.  This year, the City laid off a number of clerical workers, but the school district did not. Now, more senior “Clerk/Typists” who lost their City jobs are bumping into our school secretary positions (the duties and requirements of both positions are considered to be equivalent by the Civil Service Commission). Some of those secretaries may be able to “bump” less senior City or school district workers and stay employed, but the end result will still be devastating, because schools will lose their beloved secretaries and at least some less senior school district employees will lose their jobs — even though we did not lay them off. 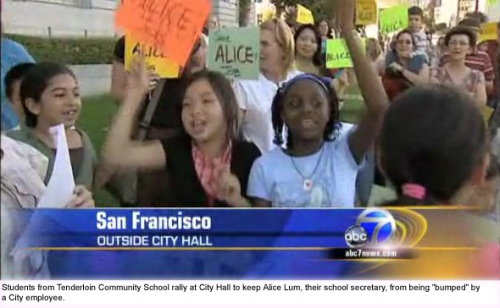 We’ve known for a number of months that this was a possibility, so the district went to Court to try and stop the bumping from happening — we were notified two weeks ago that we lost the case (IFPTE 21 and SEIU 1021, two unions that represent both City and school district employees, chose to join the lawsuit on the City’s side) . The General Counsel is reviewing our options, but for now there is nothing we can do but sit by and watch City workers bump our employees. So far, 60 school employees, mostly school secretaries and IT workers, have been notified that they will lose their jobs at the end of the months due to bumping. Those employees must now figure out if they can bump into other open positions or start looking for work.

Not surprisingly, these developments are causing much outrage, anxiety and sadness in our schools. Jennifer Steiner, the principal of Monroe Elementary, wrote this to the Board of Supervisors and the Board of Education:

I am extremely upset to hear that our beloved clerk, Midie Lau, has received a letter that she will be losing her position at Monroe Elementary School at the end of November. While I understand that the Department of Public Health must make budget cuts, displacing the existing staff that know about local and district policies and school district systems can only serve to hurt the very students and families that Monroe serves.

It is additionally alarming that the people who are getting laid off and bumped are disproportionately women and people of color, such as Midie. Monroe serves a student population that is 30% Chinese; many of these families are monolingual Cantonese-speakers—Midie is the only full time employee at our school who speaks Cantonese outside of the classroom teachers.  She is an invaluable member of our community.

We are a community school where parents feel welcomed in the front office by someone they know and trust.  Displacing Midie with another clerk who has never worked in a school will create a devastating disruption in our service to students and families.

Tomorrow, City Supervisors will consider a resolution that would restore some of the eliminated positions in the Department of Public Health, and therefore, school district employees. I certainly won’t stand in the way of beloved workers getting their jobs back, but at best this is a temporary fix — the state of the City budget may necessitate layoffs in the future, so we could still face bumping at some later date.

If you’d like to speak up in favor of school secretaries — employees that do essential, specialized jobs in our schools — please come to the Budget committee hearing at City Hall tomorrow at 11 a.m. in Room 250. Or send an email to our City Supervisors to share your views.

Like Loading...
This entry was posted in issues and tagged bumping, labor, layoffs, staff. Bookmark the permalink.