The problem we all live with

I finally listened to Part II of This American Life’s two-part series on desegregation in America, and I highly recommend taking some time to listen to the series if you care about school assignment policy and diverse schools.  Part I is about the benefits of integrated schools, and has some truly awful-to-hear excerpts from public comment at a Missouri school board meeting after a white-majority district learns that students from a black-majority school in a neighboring district will be coming to their community.

Part II is fascinating. It’s about Hartford, Connecticut, a majority high-poverty black/latino district, and how after a long court case, the district is trying a voluntary desegregation program. There are several important ways that the Hartford situation differs from San Francisco, and some important parallels.

In many ways we are already trying a voluntary desegregation program  here in San Francisco and failing badly. Maybe the attractions of the new Willie Brown MS will help us turn that corner — building a program that clearly will attract white and asian families. Maybe. But if these programs make one thing clear, it’s that desegregation policy is not easy.

Listen to the programs (free if you stream them from the web site) and let me know what you think.

What do military exam failure rates really say about schools?

The Associated Press headline sounds alarming: “Nearly 1 in 4 fails military exam.” For the first time, the story goes on to report, the military has released the results of the Armed Service Vocational Aptitude Battery (ASVAB) exam, which is used as an entrance exam for people seeking to join any branch of the military. Those results–from more than 350,000 high school graduates who took the exam between 2004 and 2009–were analyzed by the Education Trust in a report titled “Shut Out of the Military.” The AP reports:

The report by The Education Trust found that 23 percent of recent high school graduates don’t get the minimum score needed on the enlistment test to join any branch of the military. Questions are often basic, such as: “If 2 plus x equals 4, what is the value of x?”

The military exam results are also worrisome because the test is given to a limited pool of people: Pentagon data shows that 75 percent of those aged 17 to 24 don’t even qualify to take the test because they are physically unfit, have a criminal record or didn’t graduate high school.

Now, however you feel about the military, it doesn’t sound very good that so few Americans meet minimum standards. Indeed, the article quotes U.S. Education Secretary Arne Duncan and military leaders expressing grave concerns over what these test results say about the U.S. educational system and the implications for national security.

But here’s the thing: the group of people taking the ASVAB is self-selected, because the test is not required by any other institution. I suppose there might be school districts that encourage students to take the test, but for the most part you would only take it if you were seriously considering joining up.  And until recently, before the economy faltered, military recruiters were having trouble meeting their targets because of the dual wars in Iraq and Afghanistan.

So it’s not beyond the realm of possibility that most of the people taking the ASVAB are those with few other prospects — those who failed to enter college (or couldn’t afford it), or who could not find employment that offers the same benefits or advancement possibilities that the military does. More than 2.5 million people graduate from high school in the U.S. each year, but the sample analyzed by the Education Trust consisted of just 350,000: those between the ages of 17 and 20 who took the test anytime during the five-year period studied. This is too small a sample of U.S. high school graduates to draw the blanket conclusions reported in the Associated Press article.

To its credit, the Education Trust report dwells more on its finding that young people of color fail the test at much higher rates, presumably because they are at much higher risk to be concentrated in under-resourced schools:

[F]or millions, including many low-income and minority youth, the armed forces have been a gateway to the middle class. While giving back, recruits have developed skills and abilities that prepared them for solid careers both in military and in civilian life. Unfortunately, many of the young people today who pin their hopes on starting a career with the armed forces after high school will never get that chance.

Just as secondary schools are failing to prepare many students for college and careers in the civilian workforce, so too are they failing to prepare young men and women for military service. Perhaps most disturbingly, many young people of color are not prepared by their high schools to make the cut.

Again, however you feel about the military, the Education Trust is absolutely right that military service has represented a path to the middle class, and that path does appear to be moving further out of reach for those who need it the most. The sad thing is, I don’t think the top brass really minded being the last-chance ticket to the middle class for minority youth — until the ASVAB failure rates crept high enough to endanger future recruiting. The AP article quotes a Department of Defense report as saying that the military must recruit about 15 percent of youth to maintain readiness. It would be ironic if as a nation we only found the will to universally provide quality educational opportunities because of the demands of our military.

Posted on November 18, 2009 by rpnorton | Comments Off on Students with disabilities make modest gains

The Center on Education Policy has examined three years of reading and math scores on state tests for students with disabilities nationwide, finding that students made small gains between 2005 and 2008. According to Education Week:

The study represents a glimmer of hope that our schools are starting to take the achievement of students with disabilities more seriously, but there’s still a ways to go. Fully-funding IDEA to take some stress out of the system would help a lot; so would an overhaul of curriculum to make sure we are really offering students content in a way that supports their learning. Taking some of the “special” out of special education might help too — meaning that we should advance the idea that all of our students are all of our students and dispense with the “these are mine, those are yours” kinds of programs that deprive students of uniformly high expectations and rich content.

Comments Off on Students with disabilities make modest gains

Bayview kindergartners, then and now

Posted on May 31, 2009 by rpnorton | Comments Off on Bayview kindergartners, then and now

The Chronicle has a nice feature today on a class of Kindergartners who enrolled at George Washington Carver Elementary School in the 1995-96 school year. Through extensive reporting, the Chronicle found all but a handful of the students, and reports on what became of them — comparing what actually happened with state statistics that predicted at least a third would fail to graduate from high school.

Comments Off on Bayview kindergartners, then and now

As expected, on Tuesday evening the Board voted to issue 506 preliminary layoff notices — 144 to administrators with contracts expiring this year, and 362 to probationary teachers. This was the hardest vote by far that I’ve had to take on the Board and it was made all the more sour by the fact that it may be unnecessary: if the City does the right math and lets the schools draw 25 percent of the current balance of the Rainy Day Fund, we will be able to rescind all of the notices we voted to issue. 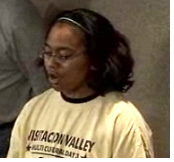 One bright spot was the special and jaw-droppingly amazing performance of “America the Beautiful” by Tavana Faataui, an 8th grader at Visitacion Valley Middle School . “American Idol” here we come! Watch the first five minutes of the meeting to see this amazing performer. Ms. Faataui and a few other students from Visitacion Valley MS will be performing with Paul McCartney at Radio City Music Hall in April.

Also of note was an eye-popping report by Mr. Hoover Liddell from the Superintendent’s Race and Racism Working Group. Mr. Liddell, who has for many years monitored the district’s progress towards desegregation and equitable distribution of resources, presented figures that many of us have seen before and yet they are no less shocking when you see them for the 5th, 10th or 15th time. For example:

Comments Off on Feb. 24 full Board meeting